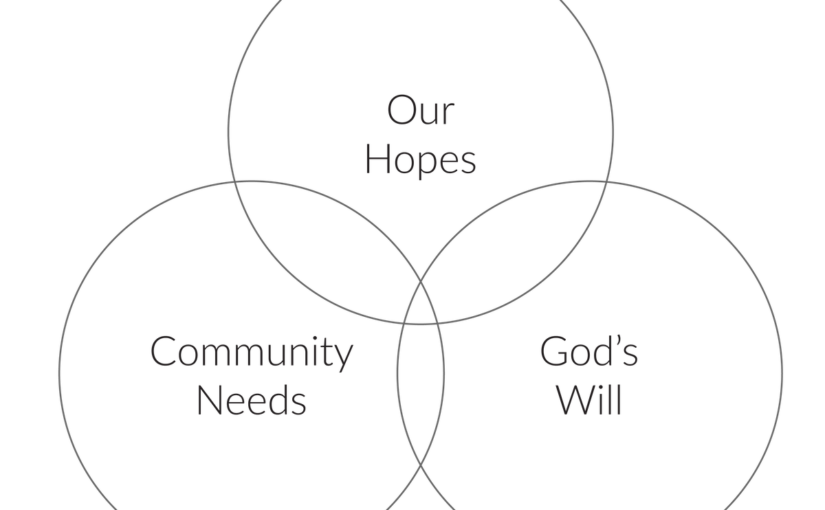 As I was going to Home Depot this morning I was thinking about vision and mission statements for congregation in light of the question “Who owns the church?” Without going into the details of my thought process I ended up thinking about the stakeholders in a congregation and how we can use stakeholder model to enhance conversations about vision and mission. A possible conversation starter would be to use a venn diagram and go through different areas without any biases.

We could follow up with questions about any of these areas, and perhaps wondered aloud if there is a place on the venn diagram that can be described as a sweet spot which we should try to expand and stay in, and leave all other stakeholder goals behind.

I think this could be a fun exercise, if we remember there are no right answers. If we start out by looking at each category separately. Starting with Our Hopes, moving next to Community Needs, and finally asking what God’s will is for the church. Starting with questions about God, might pollute the rest of the categories.

Add on: This is a simplified model, and what is missing is f.x. Pastor’s Ambition and the fact that the congregational leadership might not have a unified hope.

For a while I have been gathering articles and texts I have been planning to read and disect to understand the changes in our religious landscape, mostly wondering about the declining role of the church.

On a regular basis I am confronted with this reality. There are many empty pews on Sundays, not only in Europe but in America. There is also a declining interest in theological education in formal seminaries. So as the church decline continues there is even a more rapid decline in people willing to serve, which might accelarate the church decline.

There are writing about this issue from various perspectives and some of them are listed here below.

Michael Lipka looks at the religious landscape based on a study by The Pew Research Center. He looks at 5 Key Findings about the Changing U.S. Religious Landscape.

Some people try to find an obvious reason that makes all the difference. One of those is to blame some aspect of the multifaceted tasks that pastors have. One aspect that is fun to blame is pastoral care. Carey Nieuwhof writes an article, How Pastoral Care Stunts the Growth of Most Churches. In it, Carey Nieuwhof points to reports by Barna Group that is interesting and helpful.

The Barna group reports the average Protestant church size in America as 89 adults. Sixty percent of Protestant churches have less than 100 adults in attendance. Only 2 percent have over 1,000 adults attending.

He then adds that when churches grow to more than 200, the pastoral care demands become unbearable and unsustainable, leading to a failure.

Dr. Marjorie Royle writes an article, Denominational Identity – A Plus or a Minus?, about church planting and different attitudes towards denominational identity.

Heather Hahn writes: What draws people to church? Poll has insights. In the article she looks to Barna Group, a research done for United Methodist Communications.

Carlos Wilton reminds us that the declining church participation is not a new concept in the article, Are the Pews Half Empty or Half Full? Lessons From 734 A.D.

Here are three articles about what might slow down the decline.

Here are two articles about what might accelarate the church decline.

END_OF_DOCUMENT_TOKEN_TO_BE_REPLACED

According to Charles W. Forman in his article Religious Pluralism and the Mission of the Church, in International Bulletin of Missionary Research Issue 6:1, the issue of pluralism was for a long time met with indifference in the mission society.

END_OF_DOCUMENT_TOKEN_TO_BE_REPLACED

In his article, The Future in the Past: Eschatological Vision in British and American Protestant Missionary History, Brian Stanley gives an overview of an historical shift in theological understanding of the end times among missionaries from the English speaking word around the time of the First World War. END_OF_DOCUMENT_TOKEN_TO_BE_REPLACED

It happens in every disaster: People want to help, but they often donate things that turn out to be more of a burden. Disaster aid groups are trying to figure out a better way to channel these good intentions.

From: Thanks, But No Thanks: When Post-Disaster Donations Overwhelm

Helpful description and useful thoughts about the meaning of the church.