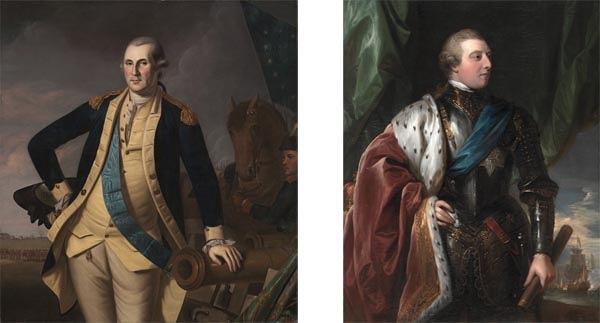 At Cleveland Museum of Art this morning a group of thirteen 9 and 10 year olds were asked to choose their leader based on two portraits from 18th century.

The first portrait was of a strong fit man in an armor, disinterested in the painter, looking to the side, giving a strong impression of power.

The other was of a man in casual clothes (according to the kids), looking straight at the painter, leaning on a cannon almost carelessly, trying to engage us.

The curator asked the kids which one of the two was more of a leader. Most of them had strong opinions, and when they voted I was utterly amused. Six of them voted for the casual guy, and six for the man in armor. One kid decided to abstain.

The arguments were interesting and varied greatly. I thought it was interesting that one kid talked about the casual guy’s lack of fitness (i.e. he is fat) as an argument against him.

After the voting, kids from both groups began to lobby the one who decided to abstain, trying to get the necessary swing vote.

The kids voted based on artistic expressions of the painters, and their personal preference and understanding of leadership traits. If we would have thrown in the historical background behind the two men, which we didn’t, my feeling is that at least some the kids would have been influenced by patriotism.

My observation of the interactions and the voting process made me think of my own preferences when it comes to leadership. What do I think is a good leadership, what traits are important and which are not? It made me think about portrayals. Who portrays our leaders? What was the agenda of the painters? What aspects, other than leadership traits and media images, affect my own voting decisions?

The lobbying worked back at the museum, the kid that originally had decided to abstain decided to choose a leader. A conclusion was finally reached.

If the fourth graders at Cleveland Museum of Art had made their decision slightly over 200 years ago, we might all still be drinking tea.

(The images of George and George are taken from http://www.clevelandart.org).

This site uses Akismet to reduce spam. Learn how your comment data is processed.